Parkasaurus, originally released September 25th, 2018, is a tycoon game about creating and maintaining the best dinosaur zoo you can. It's not too far off from games like Zoo Tycoon, in that you have to cater to both guests and dinosaurs for your park to thrive. As of writing this review, the game remains in early access. This is, of course, a huge turn off to some people, but I in all honesty am not swayed very much by it. As long as you get a full game in the end, it's not so bad to watch it develop, is it? (Unless, of course, the game ends up lost in a purgatory state. Tragic.) Being in early access, however, does also mean that updates and bugfixes are pretty frequent - there have been three updates within the past two weeks alone. If you do happen to encounter a bug, as I did with a broken dinosaur toy, chances are it'll be gone before very long. The bug I found was patched out just earlier this week!

The game currently boasts a roster of twenty-four dinosaurs to exhibit and care for in your park, spanning across six different subgroups based on classification (ex. Theropoda, Stegosauria, etc.). Each individual species has different needs that you must to cater to, including (but not limited to) hunger, privacy, and enrichment. Different species also require fitting habitats - by altering the surrounding landscape to their needs you can create different biomes. Parasaurolophus, for example, prefers tundra habitats; to fulfill this you fill an enclosure with the needed tile (mud, in this case) and make the land more rugged with hills valleys, while keeping the water to a minimum. This system (along with that of biodiversity) encourages players to create varied exhibits for their dinosaurs, rather than plopping them all down into functionally-identical homes. here's a sample of my current park, Meteopolis: 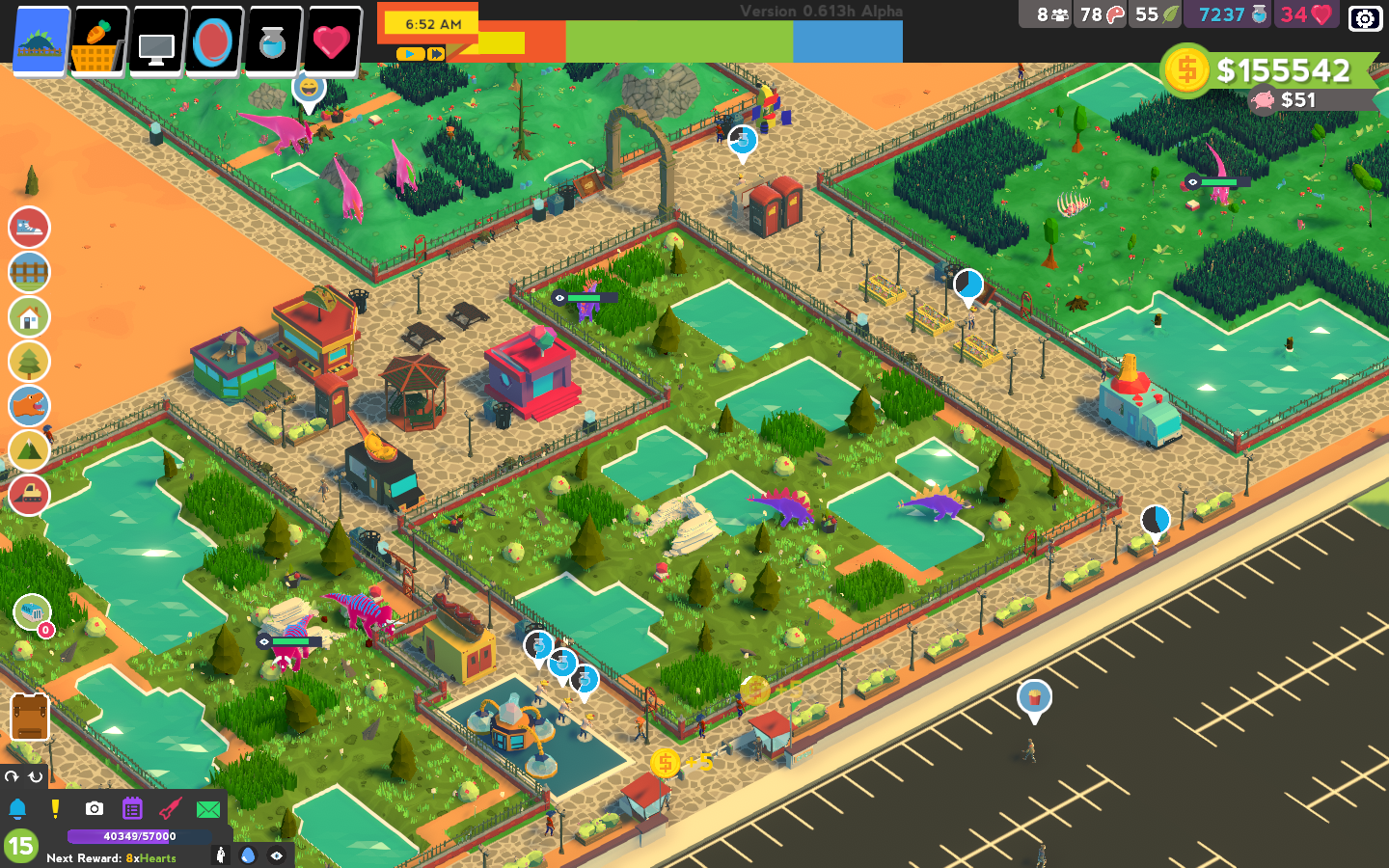 Admittedly, i'm not very good at designing exhibits. Or parks, for that matter. Just look at that awful conglomerate of restaurants.

One big issue I have with terraforming, though, is how awkward it can be to create uneven land, like hills and lakes. It does work perfectly fine if you're careful and think it out first, but going back to fill in a water source or adjust the height of just about anything after making it can be a nightmare. My advice is to avoid overlapping corners and edges - if you end a new area just before another one begins, your terrain should turn out okay. Apart from that, I do think a little more variety in biomes (such as a desert, perhaps?) could aid even moreso in giving players variety in their exhibits.

Most features of your park (including new decor, attractions, and dinosaurs) are unlocked either with science credits or heart credits. These are accumulated by hiring scientists and setting them up at research stations or by making your dinosaurs happy, respectively. Science credits are used moreso to gain profits and attention for your park, while heart credit rewards give you access to new dinosaur subgroups or better ways to care for the dinosaurs you have.

To get new dinosaurs, you have to travel through a time portal to find and dig up fossils in a minigame reminiscent of that of Pokemon Diamond and Pearl's underground, if you're familiar. If not, it's probably best described as a heavily-modified version of Battleship. It's not the best feature, in all honesty, but as someone who's very fond of the aforementioned Generation 4 Pokemon games it is definitely a welcome addition.

After collecting enough fossils and buying a suitable gem, you can trade them all in for an egg of your choice. Leave it in an exhibit and before long you'll have your very own baby dinosaur! They'll grow up gradually over the next few in-game days and are usually considered adults at around a week of age. Time really flies when you're... a dinosaur, I guess.

If you're particularly attached to a dino, you can buy a funky hat for them! I gave this one a fedora: 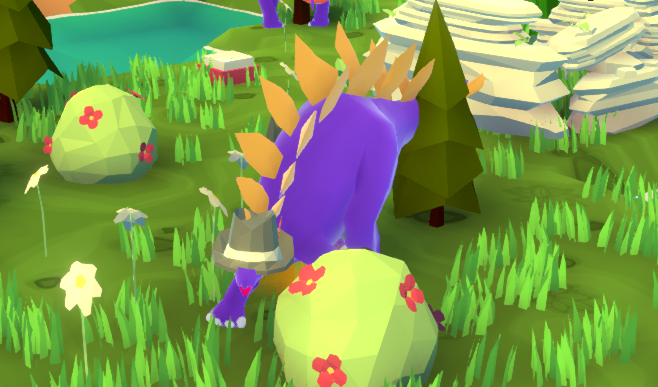 Immediately after taking this screenshot he tried to attack a nearby visitor. I think it's his way of telling me he hates it. God can't hear you, Murray.

Gameplay aside, Parkasaurus utilizes a colorful, cartoony style to give it a unique charm almost comparable to that of children's picture books. The available dinosaurs are easily distinct from one another while also clearly representing their respective species. I will admit, though, that I'm personally not a huge fan of their bulbous eyes - they're a little too, uh, detailed for my tastes. 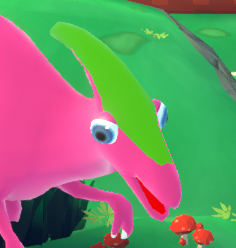 I love you, Talullah, I really do, but you really need to see a doctor for those things.

Apart from the frankly unnerving eyes, however, I do enjoy the low-poly feel of the environment and sleek look of the UI and two-dimensional screens.

On the hardware side of things, Parkasaurus isn't very demanding on your computer. While my laptop isn't the best device out there - for playing games or otherwise, really - it runs the game fairly well and as of yet I haven't encountered any issues regarding it. Chances are, your computer can run it just as well.

Overall, Parkasaurus is turning out to be a very charming game and I see a lot of potential for it to become something great. It has its flaws, but many of them will hopefully be ironed out given some time. If you'd like to try it out now, it's twenty bucks on Steam. Otherwise, I'd definitely recommend keeping an eye on it for future updates.